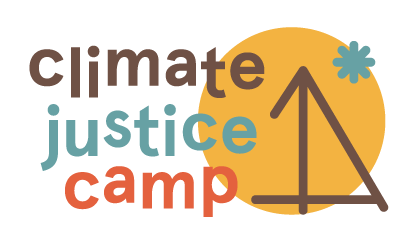 The mainstream debates concerning the responsibility for climate change & the ways to tackle it tend to overemphasise emissions and consumption while ignoring or downplaying the structural drivers of climate change and vulnerability. The failure to examine the political, economic & social dynamics that have produced climate change (and made certain people more susceptible to its harms) results in inapposite accounts of responsibility and, therefore, solutions.

In contrast, we claim that climate justice issues are definitely linked to capitalism and oppression systems, including patriarchy, racism and colonialism, cisheteronormativity, class domination, validism, speciesism (just to name a few)… We, as organizers of the climate justice camp, believe that these oppression systems are at the basis of, and are reinforced by the climate problem. We also believe that liberation that comes at the cost of other, oppressed, groups is no true liberation. As such, we find it essential that we understand the different forms of oppressions and the struggles to get rid of them. We believe different forms of oppression are interconnected and thus require an interconnected resistance in order to be overthrown. We believe this interconnected resistance can only be born out of genuine dialogue, which needs time and space, both physically in the form of the physical infrastructure provided by the climate justice camp where people can meet, as well as mentally by letting go of an action- and result-oriented thinking on the one hand and creating a space that belongs to and is co-created by people fighting in different struggles on the other hand.

For that reason, we felt that a first step was to question this climate justice stance by illuminating how different individuals and groups relate differently to climate change, due to their situatedness in power structures. This is why we organized between March and June 2019 a series of events called “Shape the camp” where we invited the people concerned by some of these oppressions to share their experiences and their relation to climate change & the climate change movement, in order to try to build the safest climate justice camp possible.

We organized 4 “Shape the camp” on feminism, LGBTQI+ issues, antiracism & decolonialism and ageism. You are more than welcome to read the reports of these meetings. Building on these, we organized a last meeting where we tried to draw conclusions from this process.

After this, we tried to apply them in order to build the safest camp possible. Among others, we decided to:

As stated before, we also see the climate justice camp as a space where everyone questions their privileges. This is why we are currently writing down some Agreements that includes the principles on which everyone should agree in order to attend the Climate Justice Camp.